If you have chickens you will get used to testing the freshness of eggs. It becomes second nature, after a few “bad eggs” which are gross and disgusting.  I’ve never had any luck with candling.  I do know that if you shake an egg and it makes a noise, throw it out! 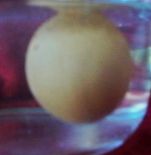 white egg is laying at the bottom of the glass of water, the brown egg is tipping up slightly. Both are good to eat.

this egg is tipping up. It’s older, but still good to use.

Take a glass of cold water, put the egg in.

Old cookbooks caution you to break each egg onto a saucer, and only use the eggs that look fresh.  If you start cracking and dropping eggs into the frying pan, there will eventually be a bad egg which ruins the bunch.  There is nothing more challenging than a rotten egg in a mess of good ones.  The only thing to do is toss it out and start over.

Some things I’ve learned by experience, that I wish someone had told me about: