The sandwich that is the oddest in my book is the Monte Cristo sandwich. It is a class of sandwich, with several regional variations. Generally speaking, the pieces of bread are sweet French toast and the sandwich filling is savory.

The sandwich filling may be ham and cheese or turkey ham and cheese, much as in a club sandwich. Some parts of the United States grill a “closed” sandwich, whereas other places serve it open-faced with Swiss (or other) cheese melted on top. The bread is always French toast. Some recipes call for a more savory approach (Thousand Island dressing on plain egg toast, with fries on the side), and others lean toward the standard American breakfast French toast with powdered sugar, maple syrup, and fresh fruit salad as garnish.

The thing is, French toast isn’t actually that unusual as a sandwich exterior. Several recipes call for two pieces of bread dipped in egg and fried. I think it’s the combination of ingredients and the name that make this sandwich stand out.

The name of the sandwich is, obviously, a nod to Le Comte De Monte-Cristo, the Alexandre Dumas adventure novel, published in 1844. The Count of Monte Cristo’s protagonist, Edmond Dantes, who had been wrongfully accused and imprisoned and subsequently escaped from jail, flees to the island of Monte Cristo and finds the legendary treasure of the Spada family. With the riches, he can fund his revenge on those who wronged him. His revenge is formidable and the results shocking. The book is a classic.

The history of the sandwich is more difficult to unearth than the Spada family treasure. Many references assume that the first incarnation of the Count of Monte Cristo sandwich was in Disneyland, in Anaheim, California (where it was served at the Blue Bayou in New Orleans Square and in the Adventureland Tahitian Terrace restaurants). The earliest Disneyland menu it is found on is from 1966.

The first cookbook to publish a recipe was the Brown Derby Cookbook.[1] Its recipe:

Take three slices of white bread. Butter the first and cover with lean baked ham and chicken. Butter the middle slice on both sides, place on meat, and cover with thinly sliced Swiss cheese. Butter the third slice and place, butter down, over cheese. Trim crusts; cut sandwich in two; secure with toothpicks; dip in light egg batter; fry in butter on all sides until golden brown. Remove toothpicks and serve with currant jelly, strawberry jam, or cranberry sauce.

The Brown Derby did not claim to have invented the sandwich. In Southern California, it was served in many cafés, from some at swanky golf courses to the famous Cantor’s Deli in Hollywood[2].

However, all these citations are predated by the Monte Cristo Hotel in Everett, Washington. The sandwich was a house special in its cafe. 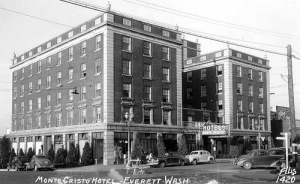 The first written citation on the sandwich was in a weekly Los Angeles Times column by Chef A. L. Wyman[3] in 1924. His recipe:

Cover six slices of sandwich bread with a slice of American full cream cheese, cover the cheese with slices of boiled ham, cover with slices of bread, tie with white string, dip in beaten egg and fry a nice brown on both sides in hot butter. Place on hot plates, remove the string and serve.

It is notable that his recipe called for cream cheese, not the Swiss cheese or Emmentaler (a type of Swiss cheese) that is fairly standard among all the recipes.

The Monte Cristo has many minor variations. The most common: The bread is made into French toast first and then grilled (using 3 pieces of bread in a “Dagwood” layering[4]); a sandwich (usually with 2 pieces of bread) assembled and dipped in an egg/flour thickened batter; meat variations such as ham, turkey, and chicken; a sandwich served with jam, jelly, fruit, or maple syrup and dusted with confectioner’s sugar (and sometimes whipped cream); and a savory version (Cumberland-head style) served with Thousand Island dressing and garnished with pickles, relish, or French fries.

Whisk egg, milk, and flour together to make thick batter. Heat skillet on medium heat to melt small amount of butter. Dip bread into batter until coated, and put into frying pan; sprinkle with grated cheese and nutmeg. Cook until golden brown on both sides. Put Swiss cheese between 2 pieces of battered bread. Grill until cheese has melted enough to join the 2 pieces together. Remove from pan. On plate assemble sandwich. Place ham and turkey on top of grilled cheese pieces, and put last piece of battered bread on top. Dust with confectioners’ sugar, and serve with side dish of jam.
[1] Doubleday & Company: Garden City, NY, 1949 (p. 183). The Brown Derby was a chain of restaurants in Los Angeles, California. The first and most famous was opened in a building shaped like a hat. The restaurants were iconic during the Golden Age of Hollywood. The first restaurant opened in 1926.

[2] The original Cantor’s—a Jersey City, New Jersey, delicatessen—opened in 1924 and moved to Hollywood in the 1940s.

[3] The regular column was called Practical Recipes: Helps for Epicures and All Who Appreciate Good Cooking. The Monte Cristo sandwich recipe was published May 24, 1924.

[4] Dagwood Bumstead was a character in artist Chic Young’s long-running comic strip Blondie. Dagwood was famous for creating insanely tall, multilayered sandwiches topped with an olive on a toothpick. This name has become a food term to describe any sandwich with more than two pieces of bread.